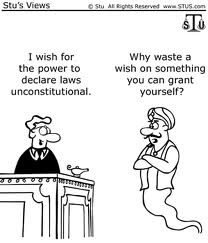 Miranda vs. Arizona [1966]
Storytime:
This case is about a man named Ernesto Miranda was arrested by police with circumstantial evidence for charge with rape. Opon the arrest, the Officers did not tell him his rights and then did not give him an attorney as well. When they used the evidence for the trial and didn't give him an attorney, they sentenced him to 20 to 30  and Ernesto filed a Writ of Certeni.
The Verdict:
Chief Justice Earl Warren decided that under the 6th Amendment, Miranda does have the right to an attorney. As a result, Miranda's conviction  was overturned.
The Precedent:
This case resulted in a whole new rule when it comes to arrests. This rule is called the Miranda warning. This rule stated that criminals have the right to know their rights upon arrest or other matters. This rule is used all of the time then and up to now.
What Else?
After the case, Miranda didn't get off that easily. Although the confesion couldn't be used, they used other evidence such as witnesses. He was then convicted in 1967 with 20 to 30 years to boot. In 1972 he was put on parol and he was released. Four years later he had an argument in a bar and was stabbed to death. Not the "happily ever after" you were expecting, right?

Kyllo vs. U.S. [2001]
Storytime:
In this case, a man by the name of Danny Lee Kyllo was accused of growing marijuana in his home and the police illegally searched his home and he was arrested. The way that the police did this is by using a heat gun on his house; if it showed a high heat rating, then the police's suspicions would be right. If it showed a low rating, then this accuisation was false. When they did this, Kyllo's house showed a high rating and the police searched his home finding the plants inside.
The Verdict:
The Court ruled that Kyllo, with a vote of 5-4, that he won the case. They also said that when they used the heat gun on his home, that counted as a search. Kyllo's charges were droped and he walked away.
The Precedent:
The rule that came out of this case was new additions to the 4th Amendment that made it so that if police want to do any searching on a persons home, they MUST have a warrent with them.